A Book and a Chat News

Bookings for the shows in 2017 continue to flood in, with guests booked through most of the first part of 2017 already, covering a large area of wrings.

Today Wednesday November 30th at 7;00PM ET on newvisionsradio.com I have mystery writer alan Russell as my guest. 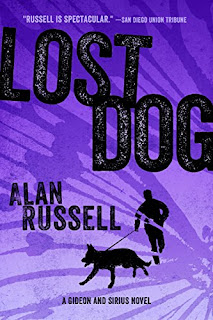 Critical acclaim has greeted Alan Russell's novels from coast to coast. Publisher's Weekly calls him, "One of the best writers in the mystery field today. The New York Times says, "He has a gift for dialogue," while the Los Angeles Times calls him, "A crime fiction rara avis." Russell's many novels have ranged from whodunits to comedic capers to suspense, and his works have been nominated for most of the major awards in crime fiction. His novels have garnered him a Critics' Choice Award, The Lefty (awarded to the best humorous mystery of the year), and two San Diego Book Awards. A native and long-time resident of California, Alan Russell is a former college basketball player who these days barely can touch the rim.

Email ThisBlogThis!Share to TwitterShare to FacebookShare to Pinterest
Labels: A Book and a Chat, Alan Russell, authors, books, radio show