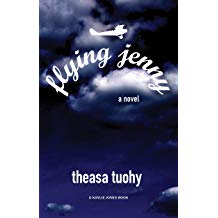 Theasa Tuohy - novelist, journalist and playwright, has worked for five daily newspapers and the Associated Press. She is co-book author of Scandalous: The Musical, an award winning show about the life of DH Lawrence, and has written a memoir about renovating her home in France. She has this to say about the writing of The Five O'Clock Follies: My career in journalism spans quite a long period of time. It is hard to realize now how difficult it was for women only a few years ago.
As a young woman I was the first female assistant city editor in the 100-year history of the Detroit News, one of the largest afternoon dailies in the country at the time. By the time I left the Associated Press, I would look around the headquarters newsroom in New York and marvel at the number of women. The Five O'Clock Follies is a fictionalized account of one woman's early struggles as a journalist.
She is the daughter and namesake of a pioneering pilot who flew an old World War I "Jenny" with an OX-5 engine, and the inspiration to her latest book, 'Flying Jenny', which tells the story of two women - a tabloid reporter and stunt pilot in the 1920s redefining gender roles and female empowerment.
A graduate of the University of California at Berkeley, she lives in Manhattan.

People are doing all sorts of screwy things in 1929. It is a time of hope, boundless optimism, and prosperity. “Blue Skies” is the song on everyone’s lips. The tabloids are full of flagpole sitters, flappers, and marathon dancers. Ever since Charles Lindbergh flew across the Atlantic solo, the entire world has gone nuts over flying. But everyone agrees that the stunt pilots take the cake.
Jenny Flynn defies the odds and conventions in her pursuit of the sky. She attracts the attention of Laura Bailey, a brash reporter crashing through her own glass ceiling at a New York City newspaper. Laura chases the pilot’s story—and the truth about her own mysterious father—on a barnstorming escapade from Manhattan to the Midwest.
Flying Jenny is a vivid portrait of an earlier time when airplanes drew swarming crowds entranced by the pioneers—male and female—of flight.

Email ThisBlogThis!Share to TwitterShare to FacebookShare to Pinterest
Labels: A Book and a Chat, Barry EvaTHEASA TUOHY, Flying jenny, newvisionsradio.com