A Book and a Chat with Charlene Ball

A Book and a Chat with Charlene Ball 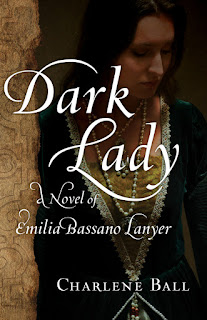 My historical novel, DARK LADY: A NOVEL OF EMILIA BASSANO LANYER, tells the story of Emilia Lanyer, a spirited, beautiful, and intelligent woman who was Shakespeare’s “Dark Lady,” a poet in her own right, and one of the first women in England to publish a book
.
Daughter of a Court musician and secret Jew, Emilia at a young age becomes the mistress of a much older nobleman, Lord Hunsdon. Through Hunsdon, she meets the brilliant, witty player and poet Will Shakespeare, and they fall in love. Dressed as a boy, Emilia goes on adventures around the city and countryside with Will. But the poet from Stratford has his own secrets, and their liaison ends unhappily.
Emilia, being pregnant, marries her cousin, Alfi Lanyer, and has a son, Henry. She learns from Alfi’s mother, Lucretia, what she has long suspected: that her family are secret Jews. Although she was raised in the English Church, she is drawn by the beauty and spiritual strength of her family’s religion. To help her husband on a sea voyage, she visits the unscrupulous astrologer and magician Simon Forman and through him learns about the secret world of dark magic. She becomes addicted to a potion he gives her. When Emilia breaks her addiction and begins to write poetry, she is encouraged by two friends, very different from one another: Margaret Clifford, Countess of Cumberland and the cross-dressing underworld character, Moll Frith. Emilia publishes her book, Salve Deus Rex Judaeorum, in 1611, becoming one of the first women in England to publish a book.

Unfortunately, we don’t have a definitive portrait of Emilia. The people pictured above appear as characters in DARK LADY. Left to right: Margaret, Countess of Cumberland, Emilia’s mentor; Henry Wriothesley, Earl of Southampton, Will Shakespeare’s patron and friend; Mary Sidney Herbert, Countess of Pembroke; and Emilia’s lover, William Shakespeare.


Here’s some more information about me and my writing.

I’ve published articles and short stories, some of which have appeared in Sinister Wisdom, The NWSA Journal, The Journal of the Short Story in English, The North Atlantic Review, and other journals. I wrote some plays also, one about Shakespeare and Emilia, and the other about Christopher Marlowe.
In my former life as an academic, I published journal articles and taught writing, English and world literature, and women’s studies.
I hold a B.A. and M.A. in English and a Ph.D. in Comparative Literature concentrating on Renaissance (early modern) literature. Studying about Shakespeare and other Elizabethan and Jacobean authors gave me an enduring fascination with the Early Modern period.

In 2009, I retired from Georgia State University’s Women’s Studies Institute where I taught and served as program administrator. Since retirement, I spend my time writing, doing community work, digging in my garden, and selling books with my wife Libby Ware, a writer and antiquarian bookseller.

I belong to a writers’ group that I helped found, and I have attended Carol Lee Lorenzo’s writing classes and Fiction Intensives workshops and Rosemary Daniell’s Zona Rosa workshops. I belong to the Atlanta Writers Club and the Georgia Writers Association. I am a Fellow of the Hambidge Center for the Arts and held a residency at the Wurlitzer Foundation of New Mexico. I’m a member of the First Existentialist Congregation (UUA) of Atlanta where I help arrange for guest speakers and edit the monthly newsletter. I live in Atlanta a mile from my wife Libby Ware.
Posted by storyheart52 at 8:19 PM