My guest Brian Meehl has come a long way since joining the cast of Sesame Street as Barkley, the big sheepdog, he was soon doing other Muppet characters: Telly, Grungetta, the first Elmo. (Brian claims to be Elmo’s “grandfather” because two puppeteers later Elmo finally met the hand that would make him a Super Monster.) As Barkley, Brian frolicked through China and Japan in specials with Big Bird. Work on several Jim Henson films included the chance to breathe his last as the Dying Master in The Dark Crystal. From that he went on to write for The Magic School Bus, Between the Lions, Cyberchase. Along the way he also wrote a few novels including Out of Patience and Suck it Up. His latest book is "BLOWBACK '07" 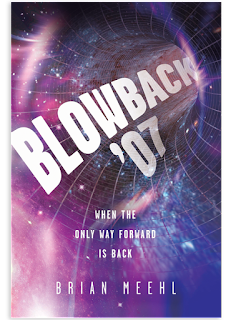 As one reviewer put it...Brian Meehl’s Blowback ’07 is a compelling young-adult time-travel adventure that vividly portrays the overlooked history of modern American football. This gripping story infuses history with humanity, not just in its depiction of football as a noble game, but in its resurrection of those who played and shaped it.
Meehl’s deft characterization and gift for infusing historical facts with emotional depth and motivation makes for a consuming read. … Meehl’s world thrills in the first book of this promising new trilogy.”
Posted by storyheart52 at 6:27 AM